Final reflections from the SHAPE 2017 team 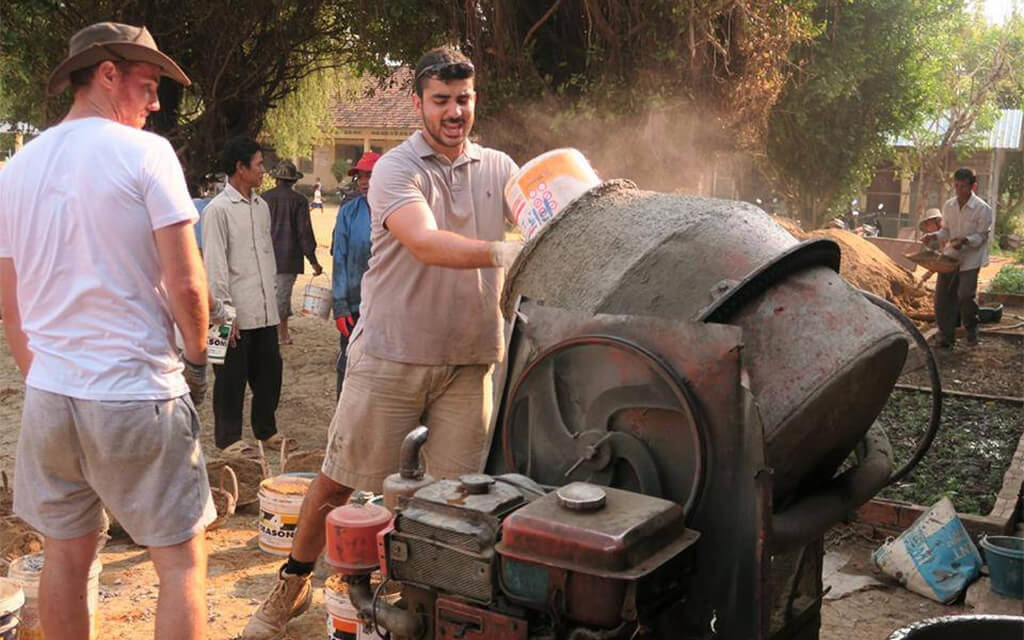 A group of 10 volunteers from SHAPE came to volunteer in schools and see first-hand what their company’s donation is doing for the people in Cambodia. If you’ve ever wondered what it’d be like to join a project team, here is the most detailed account we’ve shared, courtesy of Ben Mahmoud from SHAPE.

Where do I start to describe the trip of a lifetime? After arriving at Phnom Penh airport, we were dropped straight into Cambodia’s atmosphere – the humidity and smokiness of the city hits you and you realise you’re in unfamiliar territory. After being politely greeted by our tuk tuk driver, we crossed people in the street who were quick to give a smile and a wave, and we began to understand how lovely the Cambodian people are.

On our first full day in Cambodia, we took a 15km bike ride around the villages surrounding Phnom Penh (for some of us, it was a long time since we’d been on a bike!). Along our bike journey, we experienced a few curious cows, stray dogs, waving local kids, and numerous boats on the river, big and small. We had the chance to meet a local man who showed us how silk is naturally produced, and how it is then run through a loom to create a garment, such as a scarf. We were also offered some local treats! After an exhausting day, we spent some time getting to know each other and team bonding while enjoying a boat cruise on the Mekong River.

“The stories we heard and the sights we witnessed provided a sober reminder of what happened. Nearly every Cambodian has a story of how this event impacted them.”

Sunday was an important day, as we learned more about the history of Cambodia, and came to fully understand and appreciate why our help is needed. We visited Choeung Ek, the site of a mass grave of people killed by the Khmer Rouge in Phnom Penh, a tragedy that only took place recently in the 1970s. The stories we heard and the sights we witnessed there provided a sober reminder of what happened – so many people lost their lives and so many more were affected.  Cambodia still feels the repercussions to this day.

Afterwards, we visited another site, S21, which was once a school and then used as a torture and confinement building by the Khmer Rouge. These were just two of more than 300 similar sites throughout Cambodia. Nearly every Cambodian has a story of how this event impacted them.

After a sombre afternoon, we embarked on an eight hour bus ride to Battambang. Our luggage didn’t fit in the bus, so we needed a separate taxi to get there! The bus ride gave us a chance to learn more about each team member, which was the basis for creating strong bonds throughout our trip. 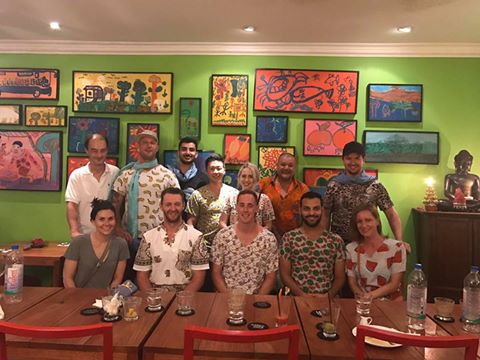 Upon arriving in Battambang, we realised immediately it would be an amazing city, and a comfortable vibe to settle into.

Monday was our first day volunteering at a school. We travelled to Ek Phnom, just outside Battambang. What a day! We were unsure about what to expect, but one thing was obvious based on the gravel and pile of sand: we’d be concreting.  The community circle greetings and introductions were a great way to get to know the community members, and learn more about the school. We had the chance to do this at every school we visited before beginning activities. The concreting went better than we expected, and was a good way to give us a taste of what was yet to come. The community provided us with a delicious meal, and we all sat on the floor in a calm environment to share the food and reflect on our hard work that day.

In the afternoon, we all travelled to the SeeBeyondBorders office and did training for the upcoming health and sport days to help prepare us in advance. We also were given the task of creating soaps that were wrapped in stockings and hung with string… it doesn’t seem too hard until we realised we had to make almost 400!

That night, after washing off all the concrete dust, we went to go Phare Ponleu Selpak, a circus performed by young people who are training to learn skills like juggling and clowning. This was another good opportunity to participate in the Cambodian culture.

“Every person on the team, along with the community members, pulled together to absolutely smash out the concrete work! I don’t think we had ever sweated so much in our life.”

On Tuesday we took concreting to the next level and finished two classroom floors and a pathway at another school. This time we were in Bavel, another district near Battambang. Every person on the team, along with the community members, pulled together to absolutely smash out the concrete work! I don’t think we had ever sweated so much in our life.

The best thing to see was the “daisy chain”, where there was a long line of people passing buckets of concrete down the line to get to the location it needed to be. Who needs a concrete pump when you have the daisy chain method?  Two team members also had the rewarding job of getting involved in the classroom activities and teaching the kids art. 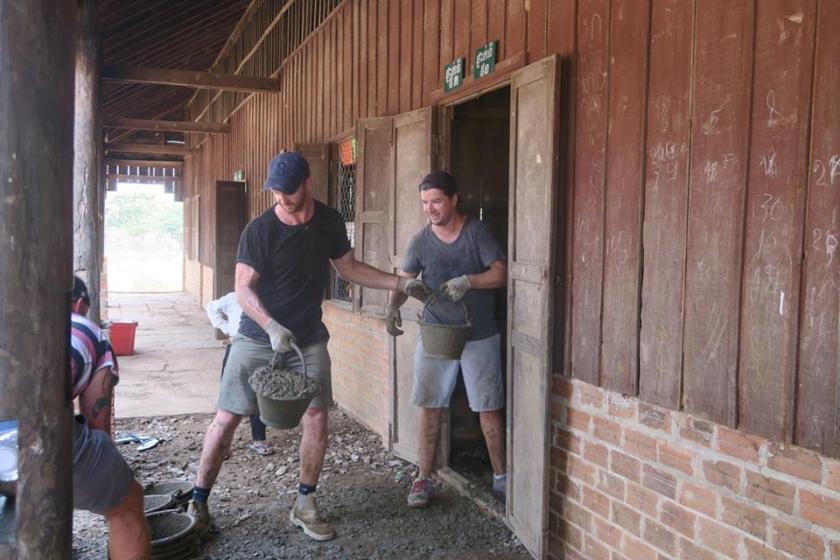 At lunchtime, the community provided us with yet another delicious meal, and we provided some Aussie treats we bought from home. The Vegemite was probably the least favourite of the Cambodians, and the Tim Tams would have been a hit if they’re weren’t so melted from the Cambodia sun. However, it didn’t deter some Cambodian community members from using a spoon to eat the melted Tim Tams.

Wednesday was Health Day at another school in Bavel! We didn’t know what to expect as it was the first time we would be specifically interacting with the school kids. Some of us were nervous to interact with the children; however, the kids were so well-behaved and happy to see us that it made our work much easier. Who knew that washing your hands and brushing your teeth could be so fun?!  In the afternoon, we travelled to another school to help paint a toilet block and create a small garden bed. We also got to witness a few of the kid’s impressive soccer skills. After every school we visited, as we had done with our introductions, we gathered in a circle again to say our goodbyes and thank yous.

In the evening we had dinner at a supposedly famous hole-in-the-wall restaurant, known as The Noodle Man. The general consensus in the group was that the noodles and dumplings were the best. Thinking about them now is making me hungry.

Thursday was much the same as the previous day with healthy day in the morning, and painting and gardening in the afternoon. After completing the health day activities, we played “Duck, Duck, Goose” (or chicken), and played “What’s the Time Mr. Wolf?” The kids absolutely loved it and the team members loved it even more.

That night a few of us travelled to the Battambang premier of Angelina Jolie’s new movie “First They Killed My Father,” a film adaptation of the book which tells the story of a young girl who survived the Khmer Rouge. Unfortunately, Angelina Jolie didn’t make an appearance. Hundreds if not thousands of people turned up to the outdoor cinema.

“The sports day was so much fun! The kids were full of energy. Some kids needed more encouragement than others, but that’s what made the process even more rewarding!”

Friday was our last day in Battambang and it was also sports day. Yet another fun day with the kids! Unfortunately, we also knew it was going to be the last day spent with the kids on this trip. The sports day was so much fun! The kids were full of energy. Some kids needed more encouragement than others, but that’s what made the process even more rewarding!

The kids were divided between red, blue and yellow teams, the events were hurdles, sack racing and running. All the kids did so well, but after these events the red team was winning by more than 40 points. The deciding round of the relay race was to determine the overall winner.  It was a close race and the blue team came up from behind to win the relay and win the overall carnival. 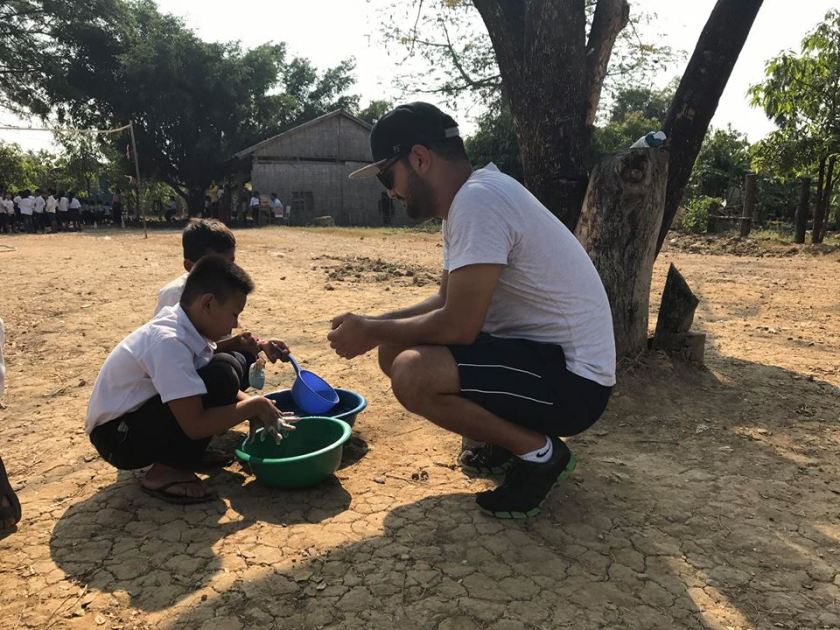 For lunch, we shared a local meal with our SeeBeyondBorders hosts and had some delicious Cambodian crispy chicken. The afternoon brought another bus ride – this time to Siem Reap. We packed our bags and got rid of the dirty boots and clothes. In Siem Reap, we’d get a chance to wind down and reflect over the week that was. It is a very lively city, with some coffee shops and restaurants reminding us of Australia. The night market was great to shop around and explore the lovely streets. Some of us even fed our feet to the fishes for a massage (or tickle torture as some would say).

The next morning some of us woke before dawn to witness the sunrise at Angkor Wat.  The tranquillity and colours of the sunrise was great to see. We continued the day by exploring nearby temples and climbing a lot of stairs. These areas are flooded with tourists so the early start was a good idea even though we could have fallen asleep in the tuk tuk.

We wrapped our final day with free time to prepare ourselves to return to reality. During our final reflection session of the trip, we could tell that this experience has had a real impact, and has changed each and every one of us.

Thank you, SHAPE for including SeeBeyondBorders in your Corporate Social Responsibility efforts! Learn more about Corporate Sponsorship on our website: https://bit.ly/2kIUtx0