SeeBeyondBorders CEO, Edward Shuttleworth, was today presented with a “Development Medal” by Cambodian Minister for Education, Dr. Hang Chuon Naron. This medal was given in recognition of the sustained and engaging role SeeBeyondBorders has played in improving educational standards in Cambodia whilst supporting the Ministry’s National Reform Agenda to bring about large scale positive and lasting change. 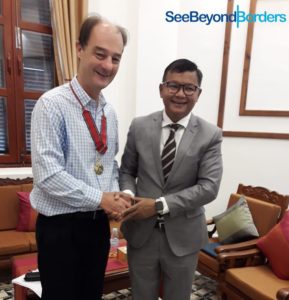 The award presentation followed a meeting between His Excellency Minister Chuon Naron, Edward and SeeBeyondBorders Country Manager, Pheung Pov, where Pov and Edward presented the key initiatives identified in the revised Strategic Plan for the Minster’s approval. Since the establishment of SeeBeyondBorders in 2009 the organisation has provided professional development to hundreds of teachers and improved the learning outcomes for several thousand children. Mentoring has been its flagship initiative. The profile SeeBeyondBorders has been able to build through its approach to the educational challenges in Cambodia has prompted His Excellency Minister Chuon Naron to confirm that further medals will be awarded later this year to the most senior Cambodian staff and to Kate Shuttleworth, co-founder of SeeBeyondBorders, coinciding with SeeBeyondBorders’ celebrating its 10 th anniversary year. Commenting on his award, Edward said “We are most grateful for this recognition from the Minster and his Ministry confirming that our work is of value to Cambodia. We are pleased to support the reform agenda the Minister has articulated and is directing and to play our part in improving the chances that the next generation of Cambodian children will have more choices in how they lead their lives simply because of the improvements in the quality of education they will be able to access. The challenges are profound and require sustained pressure. There are no false promises that can be made, but our donors, without whom our work would not be possible, should feel a sense of pride that they have backed us and their trust has been validated. Thank you Minister and thank you to our donors for the faith you place in us.” 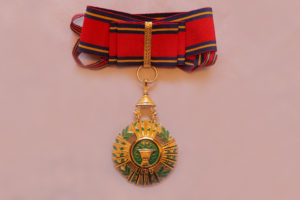 The meeting today focused on where SeeBeyondBorders believes it can best support Cambodian education and how it should frame its
new strategic objectives. Specific outcomes from the meeting included:
– Endorsement given to the focus areas outlined in SeeBeyondBorders updated strategic plan
– Assurance given that the Ministry will write to the Ek Phnom District of Education to ensure mentoring payments will be made by the DOE who will take over responsibility for managing the mentoring program in their district. This is a vital step towards ensuring the sustainability of our programs.
– His Excellency Minister Chuon Naron gave approval for SeeBeyondBorders to continue its literacy pilot program in Battambang. The initial results from this pilot program have been very encouraging and all parties agreed on the need to afford due consideration to the unique cultural role of the Cambodian language, especially within an education context.
– Two representatives from the Cambodian Ministry will accompany a SeeBeyondBorders delegation to Ireland later this year. Together they will be visiting schools, teaching colleges and other stakeholders in Ireland to learn about early grade primary literacy and the creation of positive systemic change.
– The Cambodian Ministry is to support the SeeBeyondBorders Education Conference to be held later this year in Phnom Penh. This inaugural conference will bring together many of the key stakeholders in Cambodian early grade education. 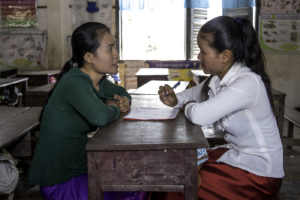 A mentor and a mentee reflect on a lesson

SeeBeyondBorders vision is for a generation of Cambodian children to be empowered by education. Today was a significant day on the road to a brighter future for Cambodia, its education system and its people. Together we can make a significant impact for the next 10 years. 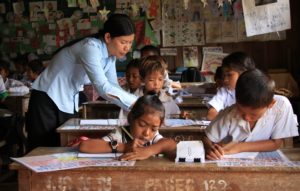