Kon Sokun, the school principal at Sdei Ler has been a key participant in SeeBeyondBorders Embedding Mentoring program since 2020 when he began as a mentor. He was then promoted two years later to senior mentor as well as a cluster director of three schools in Ek Phnom district.

After several years of working outside of the classroom in his administrative role, Sokun decided to relearn teaching methodologies from scratch after working with SeeBeyondBorders as a mentor. Through the mentorship program, Sokun learned teaching techniques specifically for early childhood education and how to effectively use teaching materials as well as skills to mentor other teachers. While initially, mentoring was a challenge, the guidelines and feedback provided by SeeBeyondBorders’ staff allowed him to build stronger leadership skills. Through a series of workshops over the past two years Sokun grew more confident and capable as a mentor.

With Sokun’s determination and commitment, SeeBeyondBorders soon promoted him to senior mentor and a cluster director of 3 schools. Having been both a mentor receiving feedback and a master mentor giving feedback, Sokun has stepped up in his position and has improved his interpersonal skills through workshops such as Training of Trainer he has proven to be a valuable asset in the teaching community.

As a master mentor, Sokun is highly knowledgeable and compassionate in his work with mentees and mentors and thoughtfully delivers training to ensure they can learn and effectively put the lessons into practice. This also allows him to build trusting relationships with mentors and mentees. 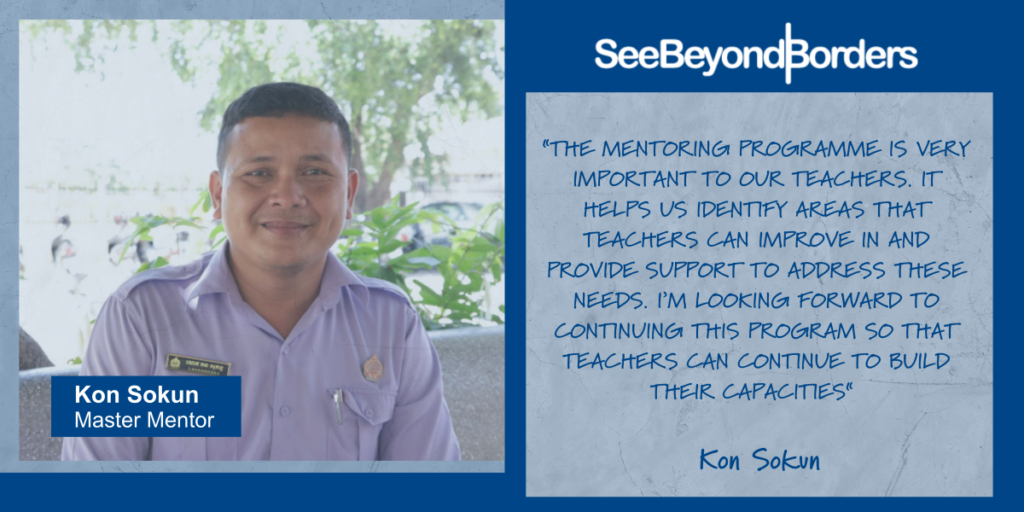 Sokun has improved as a facilitator after taking the lead in several workshops. Since the program began Sokun has stated that teachers and mentors at schools have developed a strong collaboration. This has led to improved communication about scheduling, mentoring work and following lessons plans.

Overall Sokun is proud to be a part of the Embedding Mentoring program and found it beneficial to teachers at his school, which will impact the students’ learning outcomes. He is very happy to see teachers grow after giving them constructive feedback and they are keen to continue to improve and develop as teachers.